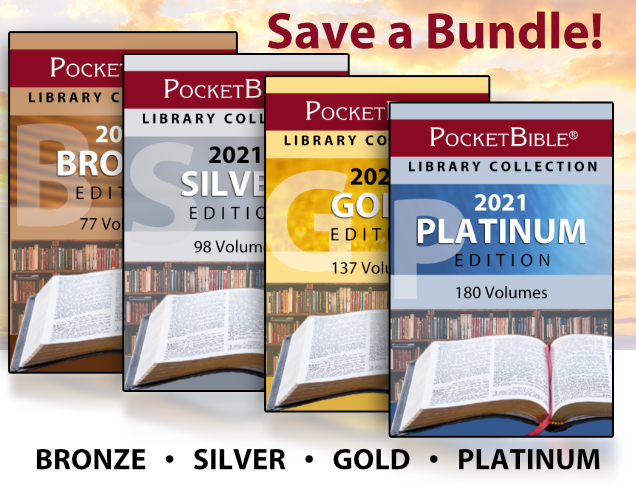 The 2021 editions of the PocketBible Library Collections are being released coincident with this status update. If your reward package included the Bronze, Silver, Gold or Platinum Library, you’ll find those books are now in your account. The special Diamond Edition for those at the higher contribution levels has also been distributed, though of course it’s not available to the public. You can download any new books from these collections using the Cloud Library feature in PocketBible.

Note that the 2021 editions contain some Bibles that are not compatible with the current Windows versions of PocketBible, particularly The Passion Translation, World English Bible with Strong’s Numbers, and the Spanish Nueva Biblia de las Américas. These will work in PocketBible on other platforms.

Note further that the collections include the very recently released 2020 edition of the New American Standard Bible. The publisher has said we can continue to offer the 1995 edition, but we need to refer to it as “NASB1995” and call the new version “NASB”. Since the Windows versions can’t be updated to use the new abbreviation for the 1995 edition of the NASB, you will end up with two Bibles both called NASB. In the Windows Desktop version you could potentially have 4 tabs labelled NASB, NASB, NASEC, and NASEC (the latter two being the NASB with Strong’s Numbers). You’ll find if you hover over the tab you’ll be able to see which one it is. In other places where you’re choosing from two versions with the same abbreviation, you’ll see that “1995” or “2020” has been added to the title so you can tell which one each is.

Because the 2021 Diamond Edition is not available to the public, there’s not an easy way to see what it contains. This collection, which was offered as a reward for those who contributed $720 or more to the project, contains everything in the 2021 Platinum Edition plus:

The total value of all these books sold separately is over $4000. Thank you again for your support!

Work continues on two fronts: Implementing features related to what we call “user data management” (notes, highlights, bookmarks, and daily reading progress), and translating the code at the core of PocketBible that reads and acts on PocketBible books and Bibles.

We’ve completed much of the nuts and bolts of user data management and have begun to work on user interface issues related to those features. For example, neither the Windows Store nor the Windows Desktop version of PocketBible allows you to set bookmarks on more than one verse at a time. (To be fair, neither does the Mac OS version.) But the iOS version recognizes that you have multiple verses selected and assumes you want to set or clear bookmarks on all (or at least some) of those verses. We prefer this behavior and want to introduce it in the new Windows version.

This is what we meant when we said that we would draw on our experience with the Mac OS and iOS versions when writing the new Windows version. Not that we were going to duplicate either one, but that we would allow what we’ve learned while experimenting with different ideas on those platforms to influence how we re-imagine the Windows version.

I’ve said before that we’d be building the new version using a different programming language, application framework, and toolset. So porting the shared portions of the code — functionality like being able to read and operate on our Laridian book (LBK) files — is mostly a “translation” task. This is not entirely true, as certain concepts are very different between the two languages, as are the syntax, idioms, and data types.

To give you an idea of the size of this task, I counted this morning (automatically, not by hand) the number of lines in the shared C++ code and it came to 457,326 lines. That’s about 8000 pages if you were to print it out. All of that code has to be read line-by-line, translated (taking into account changes made to other parts of the code during translation), and tested.

We continue to make progress in this area, though I believe we’re only about 10% to 20% through it. For example, the program is now able to detect the books you have installed and allow you to select from among them — though once you open a book, you’re not able to read text from it. The text we see on the screen is simulated — biblical lorem ipsum so to speak. I’m working on that portion of the code right now.