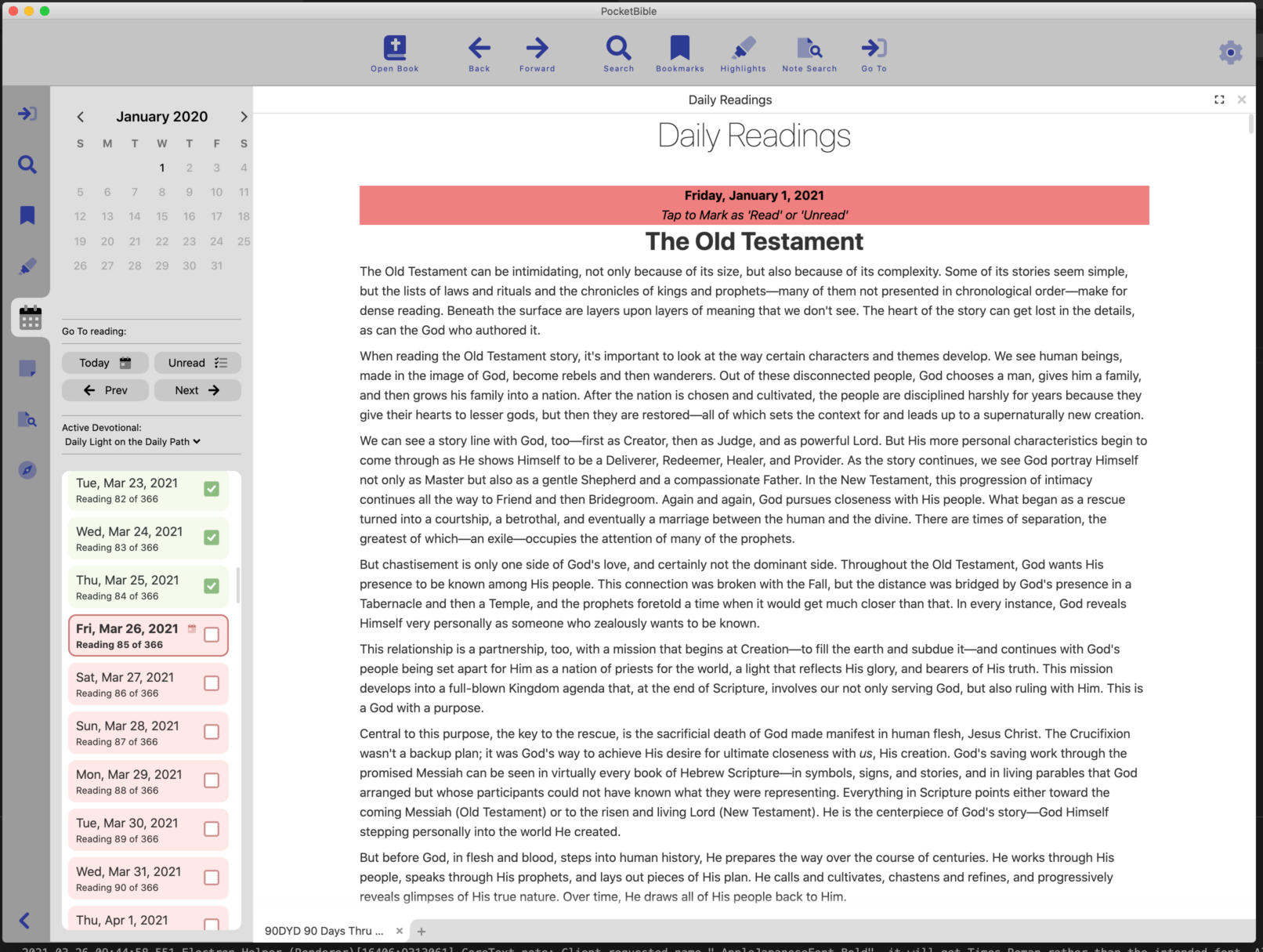 I apologize for the delay getting an update out. We get busy and we are always thinking that after we implement the next big thing would be a good time for an update. Next thing you know several big things have been implemented and no update.

Since the last time you heard from us:

Notes can be edited, saved, and sync’ed to the server. The note links in the text open the note in the editor.

Bookmarks can be created and lists of bookmarks in a given category displayed. You can select a bookmark to go to it in the text.

Highlights can be created but they’re not yet visible in the text. You can see a list of them and select from the list to go to the verse.

The option to sync Bibles and commentaries has been implemented, so commentaries and other Bibles will follow along as you scroll through the Bible text. There’s a separate option to sync dictionaries so that any request for one dictionary to go to an article for a word will result in all dictionaries responding, and another option for all devotionals to go to today’s reading when any one devotional goes to today’s reading. Here’s a little demonstration:

The scrollbar is implemented. As you drag the scroller up and down, there’s a tooltip that tells you where you’re at in the book. When you release the mouse button, the text goes to that location. There’s an option to scroll by pages or scroll by chapters in the Bible. Other types of books have similar options.

The program saves its display state, window size, and position between sessions. If  you have more than one monitor, it remembers which monitor it was on. If you unplug a monitor or switch to one with different resolution, it adjusts its size and position accordingly.

There are other little things that get done along the way, of which I may not have made a note.

We’re currently working on implementing searches. There are interesting technical challenges porting that code from Mac/iOS/Android to our environment in Windows. On the other platforms we launch a dozen parallel activities to perform a single search. The Electron environment is single-threaded. There is a way to create multiple processes but the communication between them is rudimentary. We’ve settled for trying to make it so the user interface (mainly mouse movement and interaction) doesn’t stutter during a search, but searching may be more of a serial, rather than a parallel, operation. I’m guessing nobody will notice. Searches will still be fast.

An interesting complication that arose during implementation of searching was being able to support finding words with the same root word as the one you are looking for. The algorithm that reduces words to their root words is written in an esoteric programming language that was created specifically for this one purpose. In order to translate that language into what we need (Java for Android, C for iOS and macOS), we have to use a custom transpiler that converts from the weird root-word language into Java or C. The new version of PocketBible is being written in JavaScript, which would require that we write a custom back-end for the transpiler. This was disappointing as we figured it would take several days, if not more, to implement. Fortunately, the next day we found that someone had already converted the code by hand to JavaScript. We added our modifications to support Early Modern English (KJV language) and we were back on schedule.

One of the things that happens during development is that you sometimes get to do things twice. We were using a very basic method of displaying lists like your list of bookmarks, notes, and highlights. This method worked fine (and is working now) but in those rare cases where you have 20,000 search results, it will get bogged down. So we’re replacing the already-working list mechanism with a new one. It’s one of those things that, once it’s done, you won’t notice the difference. But it requires careful surgery to remove one method and replace it with another. This is being done to support search results but other areas of the program will benefit. Most people don’t have 20,000 bookmarks, but for those who do, this will be a noticeable improvement (at least it would be noticeable if they had seen it before and after, which they won’t.)

As some of you know, last August our city was hit by a rare wind storm known as a derecho. Sometimes called a “land hurricane”, a derecho has straight-line winds that exceed 100 MPH. Our city experienced winds as strong as 140 MPH. And while a tornado has stronger winds, it generally only affects a narrow path, maybe a couple hundred yards wide. This derecho caused wind damage over an area 100 miles wide and 700 miles long.

The office build we were in took significant damage. The roof had to be replaced along with all the flooring, all the ceiling, and a good portion of the walls. We were able to continue working there while roof repairs were made and most of the interior was removed, but in mid-February we had to move out. We spent 3+ months working from home with some negative impact on productivity. Then in mid-May, a new office suite became available just 2 blocks from our old location. By the end of the month we’ll be in a beautifully restored 19th century building with exposed brick walls, original wood floors, and 12′ ceilings.

That’s where things stand as of today. Thank you again for your interest and support of this project. 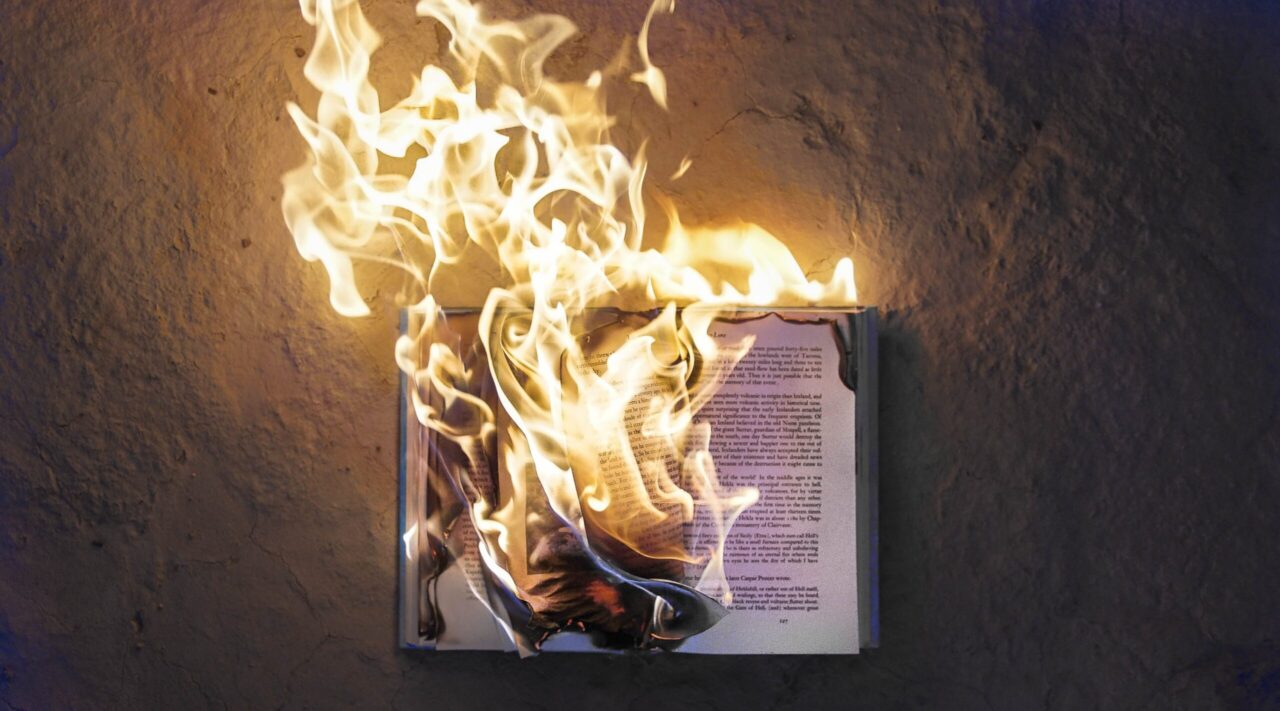 From time to time, some controversy will arise over something an author publishes with which some faction of Christianity disagrees. We’ll get emails from users requesting that we drop that author’s work from our product line. Often they point out that this author has previously been associated with some other Christian leader, whose work we also publish, and that we should drop that person’s work, too. Our response has always been the same.

We are a book store, not your pastor or spiritual mentor. We stock a wide variety of doctrinal perspectives. We base our publishing decisions a lot on what our customers request. We don’t want to waste our time creating a book nobody wants.

We trust you to choose material based on your own research. We don’t select books for you; we merely provide them for you to select from. If you don’t like the doctrinal positions of a particular author, don’t buy their books. There are plenty of others.

No author is perfect. No reader is perfect. We’re not perfect. If we refused to distribute books from authors with whom we disagreed on a minor point of interpretation, and if we refused to sell to people who have ever sinned, we would have to shut down and go live in the woods. We’re not going to do that. We’re not going to compel everyone around us to comply with our standard of belief and behavior; we have trouble enough following it ourselves.

So thanks for thinking of us, but we don’t participate in this type of debate and character assassination. Never have.

Photo by Fred Kearney on Unsplash