Running the Windows App on a Windows PC

We spent some time this month bringing the program up on a Windows machine to see how it’s working. This may seem odd, since it is a Windows app, after all. But the fact is that we’ve been doing all our development and testing on our Macs. We can do this because even though the app is being developed for a single platform (Windows) it’s being done with tools that support Windows, macOS, and Linux. That works great for us since we’re 100% Mac-based here.

One of the things we wanted to verify was that the application menu was functioning correctly on Windows. As you may know, app menus on macOS are “disconnected” from the application’s window. And every application has a special menu identified by the name of the app. So PocketBible for macOS has a “PocketBible” menu that is where you’ll find “About PocketBible”, “PocketBible Preferences”, “Check for Updates” and other application-level commands. Windows is different. There is no standard place for some of these items. So we spent some time organizing the way the menu appears on Windows.

Windows also handles “keyboard shortcuts” differently. These are the key combinations that are assigned to certain operations of the app, like Ctrl+C to copy and F10 to activate the menu. On the Mac, you define these by associating them with menu items. The operating system allows you to redefine which shortcut keys go with which operations in any of your apps. Not so in Windows. So we spent some time verifying that we could handle keyboard shortcuts correctly and coming up with simple ways to route these commands through the app.

When we release PocketBible for a new operating system (what we generally refer to as a new “platform”), we have to populate a database on our server with all the books and Bibles that will be available for it. It’s a bit of a milestone to have created those new database records, which has happened since we last met. Prior to this, the new Windows app had been pretending to be the macOS app every time it talked to the server to either shop in the in-app store or view a list of all the books owned by the currently logged-in user. With this database update, the new app can drop the charade and just be itself. 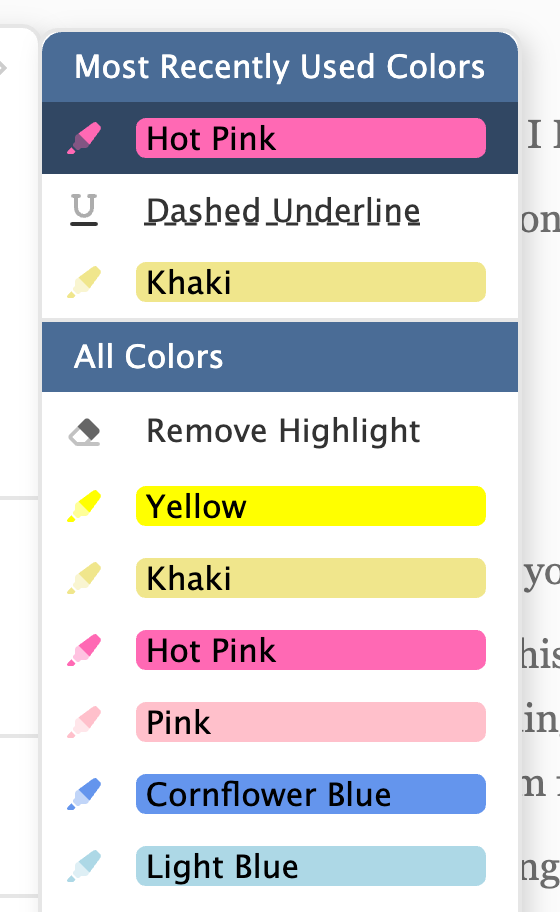 In the right-click or context menu, we added a “most-recently used colors” list to the top of the menu to make it easy to get to the colors you use most often. This is something we implemented first in PocketBible for iOS. Again in keeping with the iOS version of PocketBible, we moved the highlight eraser to the top of the list of colors to make it easier to find and get to.

If you own the Advanced Feature Set, you’ll be able to rename your colors. Even though we’re delaying AFS features to the end of the project, we went ahead and implemented that one while we were working on highlights.

We also reviewed the status of bookmarks. We implemented “create a bookmark category” from the bookmarks pane in the study panel and will have it implemented from the context menu by the time you read this.

We added a feature to move bookmarks from one category to another. I don’t believe this feature exists in any other version of PocketBible. We also added a feature to remove all your bookmarks. This is something we have had to do for people on the server before; it will be much easier if you can do it yourself.

While we were looking at menus, we also looked at the toolbar, since toolbar buttons and menu items are handled similarly in the app. We compared the new Windows app to the current macOS app to make sure we had thought of everything and added some menu items and toolbar buttons we hadn’t yet implemented.

Among these were the following. Unless otherwise noted, we added a keyboard shortcut, a toolbar button, and implemented the functionality:

On the subject of menus, we created a way for menus to be adjusted when your Advanced Feature Set subscription is enabled or disabled. The AFS features themselves haven’t been implemented yet but we need to support the mechanisms you use to activate those features.